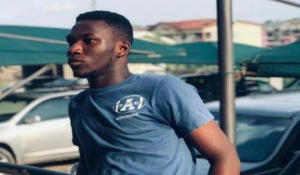 Dzakpassu Octave Delanyo
KNUST is sad to report the suspected passing of one of the students of the university.
Related Posts

Video: Maame Yeboah Aseidu exposes Funny Face and all his…

The student, commonly known as Dela, was called Dzakpassu Octave Delanyo. He was in the Independence hall and a student of Materials Engineering.According to reports, last week Wednesday, after writing a paper, he complained of headache and dizziness. He took a nap and woke up later at midnight to study for his next paper.Unfortunately, he began to complain of severe heart pains while he was studying and had to be rushed to the Student Campus Clinic.
On Friday morning, he reportedly died.The cause of his death is unknown at the moment.KNUST, friends and members of the school are deeply devasted by the news.
Source: kuulpeeps.com
0 17
Share

Okyeame Kwame was paid less than GHC3,000 a year at MUSIGA – Wife

Patrick Abankwa writes: Four financial legacies fathers can pass on ahead of Father’s…

Hanson Agyemang writes: Understanding the mathematics of the 2020 election petition