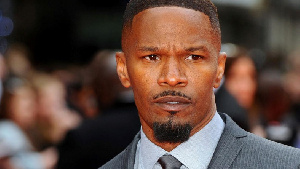 Jamie Foxx
Ghana is attracting a lot of international stars even after the ‘Year of Return, Ghana 2019’ celebration.
Jamie Foxx, an American Academy Award-winning star, has tapped into the celebration as he plans to touch his foot in Ghana for the first time. The 52-year-old has been spotted hanging out with a lot of Ghanaians over the weekend at the just ended 51st NAACP Image Awards held in LA, California, USA. The “Ray” actor was seen in a viral video with UK-based Ghanaian talk show host Dentaa learning how to greet and respond to greetings in Twi – a popular Ghanaian local dialect. In a separate video, he stated that he wants to come to Ghana with his family. He said he was supposed to be at a fashion show in Ghana but missed it. And this time, he is not going to miss it.
Related Posts

Ghanaian Celebrities Who Died Soon After They Became…

Medikal makes the money rain on beautiful sister as she…

Ghanaian Celebrities Who Died Soon After They Became Popular

Pay me the agreed money or I spill the beans -Mzbel dares ‘Mr. President’ over ‘Papa…

How To Make Money Online from home …