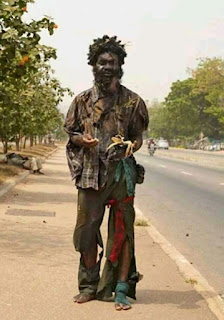 In a viral video roaming on social media, a street preacher could be seen holding a serious prayer of deliverance for a mentally challenged man.

As seen in the video, the mad man is clearly unwilling to be prayed for.

However, the overzealous preacher who could be seen praying on top of his voice forcefully laid hands on the mad man and commanded his mental problem to flee from his body.

Drama as Prophetess fails to resurrect baby after…

MTN Qwikloan will collapse if E-levy is implemented –…

The mad man tried to resist, which kind of caused a struggle, but the preacher overpowered him and forced him to the floor until the prayer was complete.

We cannot tell if the mad man indeed received his healing, as the video didn’t capture that part.

Watch the video below:

Drama as Prophetess fails to resurrect baby after exhumation